Awesome. Going to the beach in a little later.

Location
in my radio ..

Sharona said:
For the longest time, I feel as if I have been carrying a 100lb., greasy, fly-laden boulder around my person wherever I go. It's filthy, revolting and disgusting...............most of all it has weighed me down from dragging it around for so long. I started to post about this in the Introductions forum.

As far back as I could remember as a child, I would see my father coming out of my closet at night, sometimes he had been there for over an hour or more based on the time...sometimes hovering over my bed. This went on for years and I was too ashamed, too in shock and too disgusted to say anything to anybody..........and he knew it. There were times I caught him coming into my room early in the morning and I have woken up to him smiling with this "cat who ate the canary" grin, and turn on his heel while saying nothing to walk out. I have woken up with my shirt up over my head, exposing my breasts and I shudder to think of things I might have blocked out or not known about while I was asleep. I began to set up traps, that would make noise if he came in, or barricade my door to keep him out/show proof he had been in there. It lasted from the time I was age 4 or so until I left home and was married. All those years I never new what to do. All the moments I thought I was alone.......I was robbed from my privacy and mentally raped. Id taped up air vents. Took showers in my swim suit. I tried to stay at friends houses every weekend to get away. It nearly ruined my life........I nearly lost my mind. I tried to tell my mom but I never got help. I was destroyed inside over and over each time I saw a new hole in the wall were I had been watched.

When I was 15, I discovered him at my bedroom window with a crazed expression and bulging eyes as I changed my clothes for the evening. Something split in my brain that night and I have never recovered from the trauma. For the rest of my life, I protected myself from him. I lived my entire life knowing that my own father saw me as a sexual object rather than his daughter. Because of his behavior, I wore sweaters in the summer time, clothes over my swimsuit, stuffed towels under the door (and sometimes turned off the lights) while in the bathroom/shower. I believe he is partially to blame for me and my eating habits, as if subconsciously trying to deter advances. On a few occasions, he actually barged in on me in the shower and stayed there (once to punch me repeatedly, while I was mature and naked...…...another time, he came in unannounced and would not leave until I screamed). What pissed me off is that he did this all the way until I was in my early twenties, just before I moved out (though, his preoccupation seemed to be dying down, or getting sneakier, I don't know?), and I called him out finally at the dinner table, in front of my mom and her ditzy, nosey neighbor friend. I just had it. I simply looked at him, and with a trembling fire of fear and anger coming out from within, I mustered a surprisingly collected question. I asked him, "What were u doing in my closet last night?" Did the coward answer? No, he didn't even look at me, and kept eating his food, but I heard that fucker 'shudder' and even saw him shake a little as he ate. My mother just looked at him and kind of frowned, but did nothing. That response, I suppose is part of the reason my mother and I were never as close as I wished we were. Just sweep it all under the carpet...…....just like the good Catholic, middle-class Republicans they are.

Again, at the age of 23, I found a hole drilled in the bathroom floor covered by a tile that could be removed by him for his convenience. After this, he was forced to deal with his obsession and the consequences of his behavior confronted him like that ten-ton boulder.

After he died, we found many "home improvements" constructed to facilitate his obsession ---- laundry shoot craftily designed for his viewing pleasure, "so-called" exhaust fan over the shower, attic crawl space with peep holes galore. He even over-poured concrete outside my bedroom window so he would have a viewing platform.

On top of all this, he was physically, mentally and emotionally abusive to me and to my mother when we were younger. But to me, my whole life swirled around harder when I found out later he was in fact not my real father, and that she, Catherine is not my real mother, but my adopted parents and that my REAL parents were both killed in December 1997, when I was 3 years old. It was like a whole new heartbreak......not just for the lies, but because it now kind of made sense. I would ask myself through tears as a child, "how can a man do this to his own daughter?" As it turns out -- I'm not. It is comforting to know, he will be judged by a Higher Judge than us all, and will answer for all the unspeakable things he did. My step father was a voyeur from his childhood until the day he died. Voyeurism is a serious deviation. Many voyeurs have other sexual aberrations. My step father was also a pedophile. We are waiting for the day when the bodies will be found buried in the backyard. None of us will be surprised. I wish all those disgusting, and revolting deviants out there would get help...if there is someone out there like this, and you are reading this...….....GET HELP NOW. I PRAY you can live the rest of your life with your choices...….. GOD Help YOU!!!!

Anyways, last week was Fathers Day. Seems I drink a lot more in June no matter where or whatever is going on in life. If I've been a bitch to you than I am sorry. :/
How do I feel? …….."betrayed". I'll get over it. I do ever year.

strong of you to come out like that .. pretty strong .. your (step)father is a fuckface, i'm sorry ... one good lesson is .. if you have kids someday, you for yourself may be sure it wont happen to your kids or husband .. i have been almost raped as kid when 13 years but thx to his sister coming up the stairs and room, i had the urge to panick and make noise and resist from sex games to touch me and vice versa, i remember his bedroom stank like a pig stable, odd and foul stench .. his breath too and thx to his blonde sister i got to escape alltho the death treaths he gave me in my ear in the dark staircase decided the next following years, anxiety and aggression to males even to my brothers and father and i have beaten up few people total strange and anonymous males, i remember one guy when i was high octaned on whiskey, beer and lines of amphetamines or methamphetamines, two friends and one ex have witnessed it one time ... the rest i was alone and i remember a dude, i beated up and kicked where he was crippled and very much in pain, on the floor ... so i walked away .. seems your problem is worse than mine was, i am over it and refuse to use violence like my past, only to defend myself, my dame if any and mates .. but in a way it will make you vigilant abt such people in your life ... to you, kids or mates ... keep holding on to us too, i have been aggressive here too and f.u.b.a.r. 'd to others that didn't deserve it or stepped in the way without me knowing it .. is that my true face? nah ... upsetness, ptsd, trauma is an ugly animal that keeps attacking you like a rabid dog ... to live with yourself is one.. to live with trauma is another thing ... as long as you for yourself know the importance of yourself and people you cherish than you are ok ... as to drinking in june, i never really was an alcohol addict but had hard years behind me recently ... drink away in june but make it better ... only drink when food is involved .. TREAT YOURSELF NICE IN JUNE
- drink half a bottle of wine combined with all the nasty habits like food ....
- buy yourself some cool stuff or music as you should say "i deserve this no matter what anyone else says, without being a bitch"
- meet up with mates that treat you like you should be treated and have fun, you will forget that june is your month of dark clouds and dark skies where nothing stands around you ..
if you buy a new car in example, save it for the month of june, every sad day should be replaced with laughter ..
try to avoid june like it will be the hardest month ever .... override all your bad emotions with yummy, classy stuff ... try to find your own weaknesses in june away from alcohol and bridge them... didn't know untill today i'm amazed to see this post..
anyways, i have been aggressive here too and on other forums .. still knowing this, as internet aquintance online i'd say strong of you and yer a cool dame ..

Some story Sharona. It’s too bazar not to believe it. I’m sorry.

Raining like a MF. Lightening bolts all around me. Happy to be home

Seamajor said:
Some story Sharona. It’s too bazar not to believe it. I’m sorry.
Click to expand...

Pissed off, stressed to laudinum levels.

My mood is happy go lucky

Rollerblading down the himmalayas with a rocket up me arse...

You allowed someone to stuff a rocket up your ass?

You allowed someone to stuff a rocket up your ass?
Click to expand...

You allowed someone to stuff a rocket up your ass?
Click to expand...

It was plausible until that rocket part... then became suspicious :Confused3: 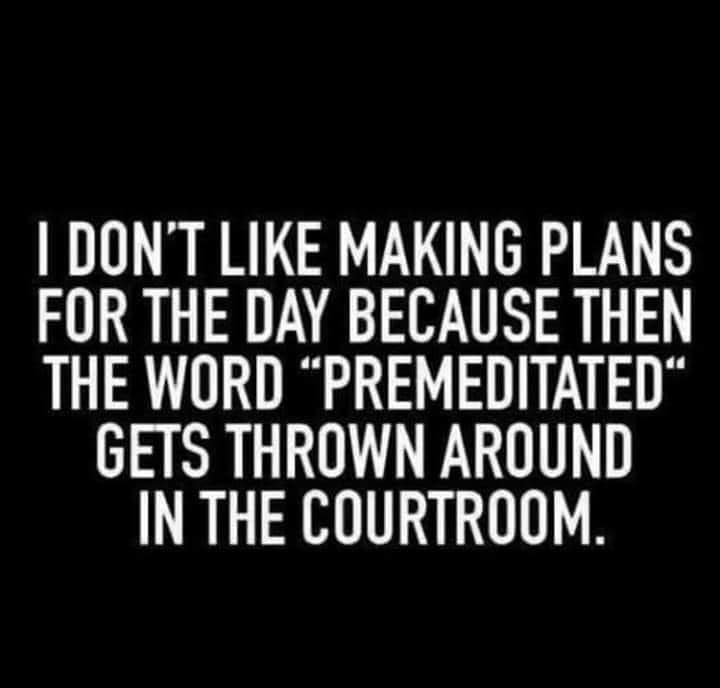 this is for My Sharona ...Trevor will benefit from the how to ...yw

Me too Swamp Duck